Sao Paulo Airport was quite annoying. No general overview where to check in, at least I couldn't find it straightaway. Long queue at check in and pass control. Flight seemed shorter than 11.30 hrs but was quite uncomfortable. 45 mins delay at arrival in Frankfurt.
Booked my seat in a train then which had 20 mins delay as well, I only heard it when I booked it already. Met my lovely sister in Dortmund and went to Ahlen together where we had a great Döner Kebap. Hmmmm.
Good to be home!!!!
Eingestellt von Schorsch um 10:18 Kommentare: 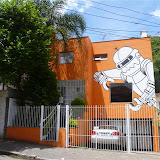 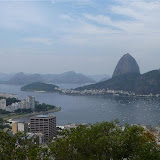 Got on a bus at 13 h in Rio, guess what ... the sun is shining, perfect beach day, but I was on the bus for 7 hrs. Took the tube to the hostel. I like it easy. Busstation to Metro, Metro to Hostel. The hostel is very nice: Telstar.

Today I went walking around in the huge Ibirapuera Park. Not doing much on my last full day.

Went to eat pizza at Speranza, nice and huge. Couldn't finish it and took the remainder home.

The ultimate last day, the day of my flight which is at 22.55 h local time, I spent at the football museum. Quite nice.

Now off to the airport.

What a great time I had!
Eingestellt von Schorsch um 12:29 Keine Kommentare:

Last full day in Rio. Rain. And it's Monday. Not only that. It is a kind of commerce day where all shops and malls are closed, Some restaurants as well. It is good that the hostel tells us today, and not mentions it yesterday, so we could buy stuff. The hostel bar is closed mondays. Some thought: "It's raining, shops are closed, lets go to a museum" ... Museums close mondays as well.
Went for a walk in time of light rain, along the beach of Ipanema and to Copacabana Beach. Got quite wet in the end, 1) by not watching the back when walking on the shore , when a giant wave came in and 2) because there was no light rain anymore ... it got heavier! So, rest of the day at the hostel. Tomorrow I will take my last long bus to Sao Paulo.
Eingestellt von Schorsch um 13:55 Keine Kommentare:

no rain in the morning. No blue sky either but off to the beach nevertheless. Stayed there until 2ish PM, even went into the ocean. Nice enough.
I then went for a run along the waterfront of Ipanema. Sundays and holidays one 2-lane direction seems to be closed off for sports, walking, skating biking ... Nice!!!!
It started raining at around 4 PM until, until ... still raining.
Later in the bathroom I saw that I not only burned my feet, that were covered in sand by the time I put sun protection on, but also a spot on my back, exactly there were I couldn't reach. Looks like old Siegfriedafter bathing in dragonblood, only the other way round. The spot is very red. Hagen von Tronje stung me quite well. Haven't seen him since.
Eingestellt von Schorsch um 13:49 Keine Kommentare: